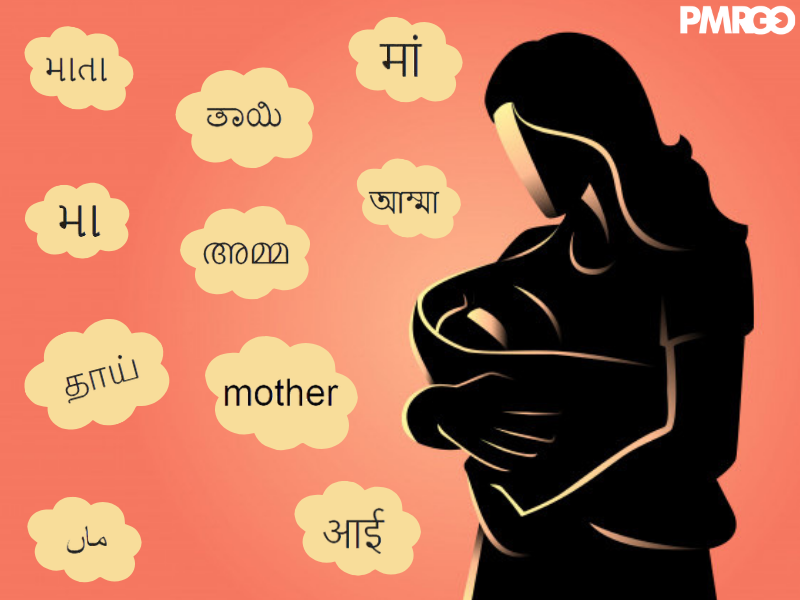 One of the most pious and beautiful relations that we have in our lives is that with the Mother. She is the one responsible for our very existence and does everything to ensure that we have the most comfortable and happy life.

On this Mother’s Day, let’s celebrate her blessed presence in our lives!

One Love, One Care in Different Languages

Being a multilingual country, a ‘Mother’ is called upon by different names in India; all symbolic of the unconditional love, care and sacrifice. Let’s have a look at these names and the varied ways in which the Mothers of different regions love to beautify themselves.

In Assam, children fondly call their Mothers as ‘Aayi’ or ‘Ma’.

Favorite Attire- The Assamese mothers love to drape saree: two-piece cloth, one at the top and the other at the bottom, which is also their traditional attire. The bottom half of this unique dress is called the ‘mekhela’, which is cylindrical in shape and is worn waist downwards over a petticoat.

In West Bengal, a Mother is lovingly called as ‘Amma’ or ‘Matri’.

Favorite Attire- The Bengali mothers love to adorn white saree with red border in their unique, customary manner. Further, they cherish a broad circular bindi in red too.

In Gujarat, the fond name attributed to a Mother is ‘Ma’ or ‘Mata’.

Favorite Attire- The Gujarati Mothers are very fond of lehenga choli or ghaghra choli, specifically, the ones with the vibrant colors and patterns. Some of them also wear bright-colored sarees.

In Hindi-speaking states such as Delhi, Chandigarh, Jharkhand, Madhya Pradesh, etc., children generally call their Mothers as ‘Ma’ or ‘Maji’.

Favorite Attire- The Mothers in these regions usually wear salwar kameez. The younger ones prefer vibrant colors while the older ones relish more subtle colors.

In the southern states of India, primarily in Kerala and Karnataka, a Mother is usually referred to as ‘Amma’.

Favorite Attire- The Mothers in Kerala and Karnataka drape themselves in beautiful sarees called as ‘Seere’. The sarees have white borders called ‘Aona’.

In Punjab, a Mother is often attributed by the following names—‘Mai’, ‘Mataji’ and ‘Pabbo’.

Favorite Attire- The Punjabi Mothers usually prefer wearing salwar kameez. They wear a special kind of salwar—the baggy, pleated trousers called as Patiala salwars. Along with this, they sport a distinct kind of flat-soled footwear called as Jutti.

In some of the Indian states such as Andhra Pradesh, Telangana and Tamil Nadu and the union territory of Puducherry, people generally call their Mothers as ‘Amma’.

Favorite Attire- The Mothers in Tamil Nadu love wearing Kancheepuram Saree. The color, texture and style of Kancheepuram sarees are very different from the usual sarees worn in northern part of India. While in Andhra Pradesh and Telangana, the Mothers wear simple sarees; some of them also wear Langa Voni that consist of a skirt, blouse and dupatta.

The Muslims in India call their Mothers as ‘Ammee’.

Favorite Attire- The Muslim Mothers in India prefer wearing simple salwar suits; some of them also follow the tradition of wearing burqas.

Irrespective of their varied names and clothing styles, the heart of all the Mothers remain the same, full of profound love, compassion and warmth. We salute the selfless sacrifices of all the lovely Mothers and wish that they be blessed with abundance of happiness in their lives. Happy Mother’s Day!